21 February 2018, update: the new JupyterLab was just released, and according to this tweet is really easy to integrate with Matlab. Probably worth checking out instead of the reasonably outdated instructions below!

I really like Python’s philosophy, but over the last years I haven’t been able to switch the code for my research from Matlab. At this point, the transition costs are too high for me, but it’s a move I have planned for some point in the future.

Now, Python has the awesome Jupyter (formerly IPyton notebook) feature, that allows for comments, code, and most importantly graphical output (i.e. figures you’ve just generated) to be shown in one document. This is a great way to share and explain the code you’re writing, since the reader immediately sees how output is generated without having to run all the analyses themselves.

Matlab has a Publish function that attempts to do something similar, and outputs HTML files containing both code and figures. However, there are a few drawbacks: it uses its own Markup text layout language, and GitHub (where I intend to host my notebooks) does not natively render html.

Luckily, some awesome people have made it really easy to generate IPython notebooks using Matlab, that are super easy to share or host on GitHub. Here’s the step-by-step guide:

See here for an example notebook, analysing some pupillometry data in Matlab. Here’s a screenshot of a notebook on signal detection theory: 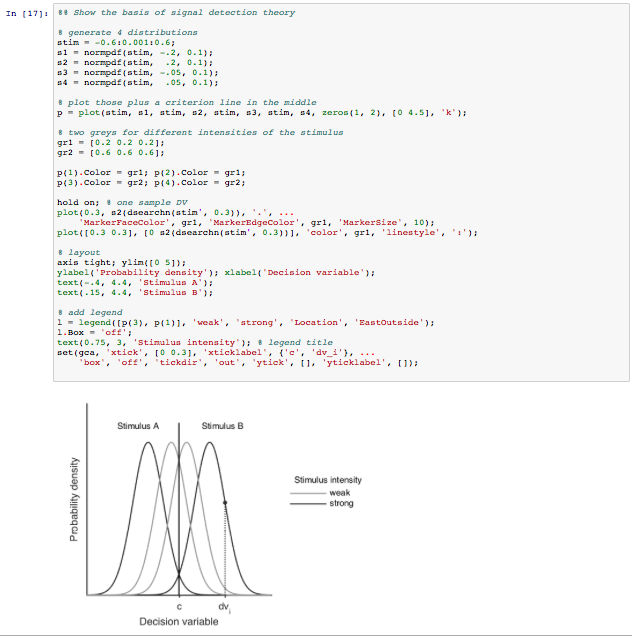 This code works on a Mac OS X El Capitan, and requires some familiarity with Terminal.